The title “Less Common Near Surface Geophysical Equipment” is the shortest version of what I could name this discussion. The problem is that people from other disciplines or people who explore spatially large regions frequently use these instruments. These instruments are common to them. One needs to keep in mind that near surface geophysics is a discipline of its own. It focuses on instruments that indirectly characterize conditions at depth. For that reason, the methods below ended up in this discussion. For common near surface geophysical methods, visit the home page.

Infrared and thermal photography refers to images taken with a camera that records radiation just beyond most human’s ability to see. The background image for this page is an example of thermal infrared photography. Both types of photography record images from light in the infrared range. The difference between the two types of photographs is in the wavelength of light that the camera is most sensitive. Infrared is sensitive to wavelengths between about 0.76 and 1.5 microns and is sometimes called near infrared. In contrast, thermal infrared photographs are general more sensitive to a range of wavelengths between 9 and 14 microns, which are longer wavelengths.

Because infrared and thermal infrared images are a type of remote sensing, people include it as a geophysical method. Unless one is looking at variations in a building’s construction, shallow structures, or very near surface conditions that are situated in a manner that one can easily take a photograph, this application is left to those who fly planes and own satellites. On the other hand, there is a new market opening up with the use of drones. Today, manufactures are building drones with infrared and thermal infrared cameras.

Unlike GPR, line locators are designed specifically to locate conductive buried pipes, cables, and wires. Line locators are a remote sensing or indirect method for locating targets of interest. This is often the reason why geophysicists include them as part of their near surface geophysical toolbox. I included them in this list of less common near surface geophysical methods because they have no other application in geophysics other than to locate lines. 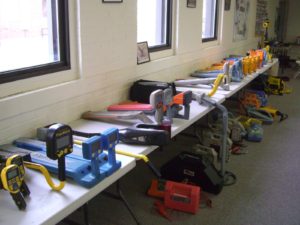 Only in some very special applications (possibly for military or security) will a near geophysical survey require a metal locator designed for treasure hunting. These consumer orientated metal detectors are very sensitive to small metal objects that are within inches of the ground’s surface. Thus, they offer little assistance with near surface geophysical investigations that typically require more than a foot of penetration. Follow this link to find out more about smaller scale metal detectors.

Gravity surveys map changes in bulk density on a very large scale. Thus, I have found it of nominal value for shallow near surface geophysical surveys. In most situations, it seems that other higher resolution geophysical services yield more favorable results. Because gravity surveys measure the earth’s total gravimetric potential field, gravity measurements reflect, in a very basic sense, the conditions from the surface to the center of the earth. Gravity measurements are driven by changes in density or changes in the volume and mass of the materials (including air and fluids) located above and below the instrument. One can mistake changes in elevation, topography, and even the degree of saturation (on a large scale) for variations in density. Given measuring gravity is a potentiometric survey, one needs to be aware that it is very difficult to converge on a unique solution, especially, with so many variable to account for.

This means that a gravity survey generally yields desirable results for specific situations. Smaller targets associated with voids and fracturing need to be very near surface. Depending on the magnitude of the anticipated anomaly, variations in elevation of about a half inch to an inch may influence the gravity results. In other words, gravity methods are often better in larger scale geophysical investigations.

Granted the inphase measurement reflects a much larger sample of material than a Terraplus KT-10; nonetheless, it is the magnetic susceptibility. This is why Geonics’ EM31 and EM38 can locate buried metal. The depth of investigation for these instruments is much greater than the Terraplus KT-10. For metal detection, one can figure on about half the depth of penetration  than these instruments penetrate for measuring apparent soil conductivities, which ends up to be about two to ten feet.

This instrument is important for those who need to determine how well a material will cool (or not) when buried in the ground or other material. For underground power cables, electricity flowing through a cable creates heat. Heat increases the electrical resistivity (not thermal resistivity) of the cable, which then creates more heat. Thus, one wants the heat from an underground cable to bleed off into the surrounding materials so the cable stays cooler. Another common use for thermal resistivity probes is to measure the effectiveness of insulation. 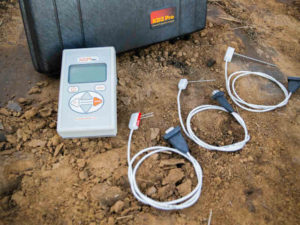 VLF Systems: receive widely broadcast VLF transmissions for reconnaissance detection of structural anomalies (e.g. bedrock fractures, massive sulphides) and / or measurement of local subsurface resistivity. A portable VLF transmitter, for optimal survey design, is also available. The EM16 VLF Receiver is the most widely used electromagnetic geophysical instrument of all time. Local tilt and ellipticity of VLF broadcasts are measured and resolved into inphase and quadrature components of VLF response. The EM16 has discovered several base and precious-metal ore bodies and many water-bearing fractures and faults.

The EM16R Resistivity Attachment uses a pair of electrodes to measure the apparent resistivity of the earth. The combined EM16/16R instrument can detect a second earth layer if the layer occurs within the VLF skin-depth. In addition, the EM16/16R can map resistive alteration for gold exploration. The TX27 is a portable VLF transmitter supplying a VLF field for surveying with either the EM16 or EM16/16R if remote broadcasts are weak, intermittent or poorly coupled with the target. For EM16 surveys, the TX27 antenna consists of a long (typically 1 km) grounded wire.

About the Author: geophysicist