In the field of geophysics, well established instruments are used to detect and map underground conditions to locate deep facilities and other buried features. These instruments include Geonics EM31 and EM34 electromagnetic terrain conductivity meters, AGI’s SuperSting R8 resistivity console, Geometrics Geode and accessories for MASW, Sensors & Software’s pulseEKKO Ultra GPR, Geometrics magnetometers, and conventional line locators like Radiodection’s RD8000. Each of these methods has its advantages and disadvantages. Success is strongly dependent on size, shape, depth, and contrast in material properties. In conjunction, they offer a comprehensive view of the subsurface.

The above geophysical instruments are increasingly being used as an alternative to traditional methods such as drilling or excavating due to their speed and efficiency. The data collected from these tools can often help identify the location of deep facilities and subsurface features with greater accuracy than manual methods. In addition, there are environmental benefits associated with using geophysical instruments over manual methods. These methods minimize disruption to the surrounding environment while still providing detailed information about the subsurface. Therefore, it is important to seek out experienced professionals. Find one who has experience with using these powerful tools for locating deep facilities and subsurface mapping.

Geonics instruments are used in diverse industries including the military, engineering, archeology, and more. This firm is a leading manufacturer of electromagnetic terrain conductivity meters. Without a doubt, the EM31 is well known for shallower investigations. However, the EM34 with its greater depth of penetration is a good choice for larger deep facilities, pipes, cables, and other buried structures.

EM31 is an electromagnetic instrument. It can be used to map lateral variations in soils up to 15ft to 20ft deep. In addition, it is commonly used to locate buried metallic objects such as private utilities and contamination. Operating on the principle of induced electrical currents, measurements are made along survey lines. The lines are processed into maps that can reveal anomalies associated with metal objects or variations in soils. The EM31 method offers higher resolution than an EM34 or a magnetometer. The lower frequencies of an EM34 yield greater depths of investigation than the higher frequencies of an EM31, which provide greater resolution.

The EM34 is an electromagnetic instrument for mapping geologic conditions at depth and for detecting large features made of metal to depths of about 125 feet below the ground surface. It uses lower frequency radio waves and larger coil separations than an EM38 or EM31, which allows for deeper penetration. The EM34 utilizes two coils placed 10m, 20m, or 40m apart on either side of a station. By generating profile or plan view images from these readings, large features such as faults, deep facilities, wrecks, or buried rooms may be identified at great depths with less effort than drilling or excavating.

AGI’s SuperSting R8 electrical resistivity imaging system is a popular and powerful tool. Geophysicists, geologists, engineers, hydrogeologists and other professionals use it in a variety of fields. This system helps to map geologic conditions and man-made subsurface features at great depths.

ERI is a geophysical method that utilizes electrical current to measure variations in resistance beneath the ground surface. Lines are placed over areas of interest. In comparison to EM and magnetometer methods, ERI produces relatively high-resolution detail in 2-D. Multiple lines can create 3-D presentations. Direct current (DC) electrodes are used in most ERI surveys. The instrument and placement of the electrodes measure differences in electrical resistivity as a function of depth. In other words, the geometry or placement of the electrodes drives the depth of investigation and resolution. ERI surveys usually produce cross-sections that provide valuable insight into subsurface conditions. An interpretation of the results may detect and/or map deep facilities, soil stratification, buried metal, bedrock conditions, voids (e.g. karst features, caves, mine rooms), and foundations for site characterization studies. ERI is suitable for many engineering, geological, environmental, and archaeological applications.

Multi-channel Analysis of Surface Waves (MASW) is a powerful geophysical technique that is used to identify and map variations in soil stiffness, as well as for detecting air or fluid voids beneath the surface. MASW is capable of covering large areas much faster than other methods such as drilling, probing, or excavating. MASW data collection requires minimal disruption and disturbance to the area being evaluated. This makes it an ideal choice for mapping deeper targets in congested or sensitive environments and locations. 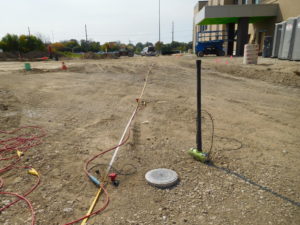 The process begins by setting out an array of geophones. Next, the operator generates seismic waves at the surface. These waves are then converted into digital signals which are analyzed to yield information about the subsurface structure. The analysis produced by MASW reveals details on bedrock and soil composition, sedimentary layers, voids, and more. MASW can also be used in combination with other geophysical techniques like EM, Ground Penetrating Radar (GPR), or electrical resistivity imaging (ERI) to create a comprehensive view of an area’s subsurface environment. The accuracy of MASW surveys depends on several factors such as depth, size, number of geophones, source-receiver geometry, signal frequency,  etc. In addition to this, site conditions like nearby structures or plants generally do not interfere with accuracy.

With good conditions, pulseEKKO Ultra Ground Penetrating Radar (GPR) is a valuable geophysical instrument used for imaging underground conditions, much like sub-bottom profiling. Unlike other conventional GPR systems, the pulseEKKO Ultra unit, with its unprecedented stacking capabilities, often penetrates twice as deep. While it does not have the portability of EM, it covers relatively large areas for finding voids, abrupt changes, and buried metallic items. GPR does this without having to disturb the subsurface. By emitting high-frequency electromagnetic pulses into the subterranean, GPR can detect objects at various depths. An operator interprets the reflections to map zones of interest. Smaller diameter targets often yield classic hyperbolic signatures that are recorded by a digital video logger. Through the use of cutting-edge imaging software, these reflections can be combined to build 2-D or 3-D images. The results commonly provide precise positioning, size, and depth information about deep facilities or other buried items detected by GPR. 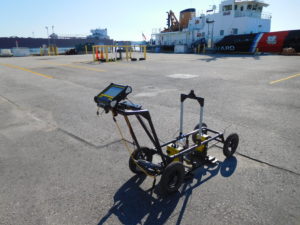 This tool is extensively used for many different purposes in geology and engineering. It offers a non-invasive, highly efficient way of obtaining detailed mapping information with minimal disruption and downtime. The technology works by responding to changes in the electrical properties of materials at depth. Changes in groundwater, soil composition, voids, or buried objects are all detectable using radar technology. With the pulseEKKO Ultra GPR, engineers can map underground layers including bedrock and soil stratigraphy as well as unknown infrastructure. For example, utilities, deep facilities, or storage tanks are often located without drilling or excavations. This revolutionary tool can help to reduce costs associated with construction projects. GPR can enhance health and safety standards when working on hazardous sites with unknown subsurface features.

The Geometrics G858 magnetometer is one of the world’s most accurate and sensitive handheld magnetometers. It is used to map distortions in the earth’s magnetic field. Distortions are often produced by ferrous materials, making it an essential tool for near-surface geophysicists. With its unmatched precision and sensitivity, the Geometrics Cesium vapor G858 magnetometer allows users to detect small deviations in magnetic fields.

A magnetometer is a geophysical instrument that measures the strength of a magnetic field. It can be used to detect buried ferrous metals. This includes buried drums, wells, manhole covers, steel pipes, shipwrecks, and unexploded ordnance. This instrument is most sensitive to concentrations of ferrous metal (a type of metal that attracts a magnet). The technique often works well for detecting targets by mapping changes in the earth’s magnetic field caused by ferrous metal beneath the surface. When ferrous metal is present, it distorts the measured magnetic field. Magnetometers can be configured for either 1-D or 2-D applications while achieving much greater depths than traditional metal detectors.

Conventional line locators are specialized instruments. Generally used to locate underground private and public utility cables and pipelines. The instruments are non-intrusive. The most common models usually consist of two separate components – the transmitter and the receiver. These antennas work together to map the electromagnetic field around a target. This allows operators to conduct their searches with minimal disruption to the environment, saving time and money in the process. In some cases, operators may also take advantage of a technique called ‘induction.’ Induction methods induced a current in a metal object buried underground. The current creates a new electromagnetic field that can be detected by the locator device. In other words, the operator can follow the response to locate or identify pipes, cables, manhole covers, and other buried metal objects that lie beneath the surface.

This technology is invaluable for many applications such as helping civil engineers and construction teams. These professionals can plan out projects by identifying existing infrastructure before they begin building. Furthermore, since it does not require any physical excavation, it can be done in less time than traditional invasive methods. Less time can save considerable costs and resources in the process. Last, their usage has been extended over the years to include activities like near-surface geophysical applications and archaeology. Operators found they work well where they can be used to identify subsurface structures and objects without damaging the near surface.

In summary, electromagnetic terrain conductivity meters, ERI, MASW, pulseEKKO Ultra GPR, magnetometers, and conventional line locators are all powerful geophysical instruments. These instruments are commonly used to detect and map underground conditions. Each of these techniques has its advantages and disadvantages. Together they often work to provide a comprehensive view of the subsurface. Often these methods are faster and more efficient than other traditional methods, such as drilling or excavating.

If you need to locate deeply buried facilities or map the subsurface, be sure to consult with a professional. Identify and hire an experienced professional who is well-versed in the use of geophysical equipment, one who has extensive knowledge of its various applications, and the ability to utilize it to its full potential. Investigate their qualifications, expertise, and experience to ensure they are properly equipped to manage any relevant tasks or projects with confidence and proficiency, as well as handle any potential problems encountered along the way. Consider their references and ask for evidence of their prior work, such as project reports or research papers they have written. Make sure they are comfortable in your specific business environment and understand all associated policies and procedures before making a hiring decision.